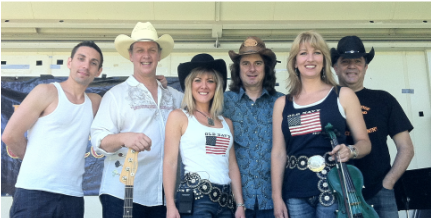 Pamela Rose,  along with two of the other band members, belt out strong vocals, creating great harmonies on top of a solid and slammin’ rhythm section.  Combining  over  30   years  of   touring   and recording  accolades,  Pamela Rose  and  Windy City Country  has  performed for audiences all over the globe.  Collectively, they have worked with artists such as Richard Marx, Dave Mason, Tanya Tucker, Johnathan Brandmeier, Ben E. King, Randy Travis, Three Dog Night, The Platters, The Greg Kihn Band and Pam Tillis. 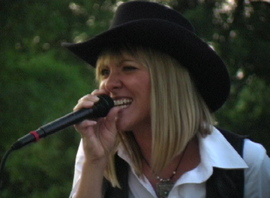 Pamela Rose - Lead Vocals.
Pamela is an accomplished vocalist, dancer, and corporate entertainment producer in Chicago. Her voice can be heard on numerous radio and television commercials for Old ElPaso, Pledge “Grab It,” McDonald’s, Homemakers, Disneyworld, Ethan Allen, and popular video games such as “NBA Hangtime” and “You Don’t Know Jack!”
She has worked with Richard Marx, Josie Aiello (Qwest), Soleil Moon (MFO Records) and has performed in the opening act for artists such as Elton John, Donna Summer, KC and the Sunshine Band, The Temptations, Cindy Lauper, and Rita Rudner, as well as performed for corporate events all around the world. She has travelled across the globe, performing for our US Troops to Japan, Germany, Spain, England, and yes... Greenland! She co-owns the Chicago corporate entertainment company Mystique Productions, Inc. and currently sings lead in other popular Chicago-based bands including The Orchestra 33 and a military benefit album called The Blank Check Project. 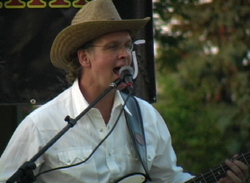 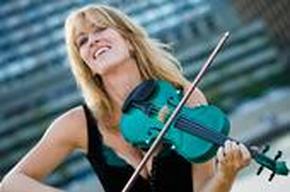 Jennifer Lowe - Fiddle/Vocals.
Hailing from Milwaukee and classically trained since the age of 5, Jennifer has performed with symphony orchestras throughout the Midwest, Italy, the UK and Puerto Rico. Being a versatile and accomplished performer, Jennifer has been fortunate to have shared the stage with many popular music icons such as Aretha Franklin, Barry White, Wayne Newton, Bobby Vinton, Anne Murray, Lorrie Morgan, Rita Moreno, Patti Page, Frank Sinatra Jr., and many others. Additionally, she has had the distinct honor to perform for some of the country’s most prestigious events including the 2001Bush Commander in Chief Inaugural Ball, the 2009 Obama Home States Inaugural Ball, and the Bellagio Hotel’s New Year’s Eve Gala 2006 in Las Vegas, Nevada. She also performs regularly with several Chicago bands and orchestras, and is the proud leader of the hottest contemporary violin show “The CoverGirls Violin Show.” 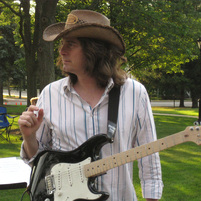 Scot Ashley - Electric Guitar.
Scot is a very popular and talented guitarist in Chicagoland.  Originally from New York, Scot earned his undergraduate degree from Northern Illinois University, where he was a prominent member of their well-known jazz band - winner of a Downbeat Award for Best Jazz Band. In his professional career, Scot toured 3 years with The Greg Kihn Band, and has played with Jonathan Brandmeier, The Lieutenant Dan Band, and yes ... Englebert Humperdink. He currently plays in several Chicago-based bands, including Mr. Meyers, The Orchestra 33 and The Blank Check Project. 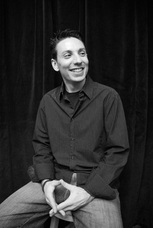 Vance Okraszewski - Drums.
Vance ﻿is a freelance Chicago based drummer and percussionist.  Since 1998 he has made a living playing music in a wide variety of settings, ranging from commercial studio work, cover bands, musicals, jazz projects and original rock groups, to orchestral percussion performance and accompaniment for modern dance.  In addition to Windy City Country, Vance performs on private events with The Party Faithful, in the original jazz group the Marques Carroll Quartet, with LA based jazz/cabaret artist Ariana Savalas, in the jazz/funk group BMR4, with the pop/jazz instrumental quartet El Stop, and as a sub on the musical Million Dollar Quartet.  As a drum set artist, he has performed nationally with Lynda Carter, Gary Sinese and the Lt. Dan Band, Lucy Lawless, Don Rickles, Jon Bauman, Justin Guarini, Diana DiGarmo, Kimberley Locke, Constantine Maroulis and Michael Orland, the assistant musical director for American Idol.  As a percussionist, Vance has performed with the Chicago Chamber Musicians, CUBE, and the Evanston Symphony Orchestra.  As a marimba soloist, he has done three solo recitals, the most recent as a guest artist at Northern Michigan University.  ﻿